We offer FREE online or telephone information on bail 24 / 7 !!! When we say "bail by phone" is available, we mean it! 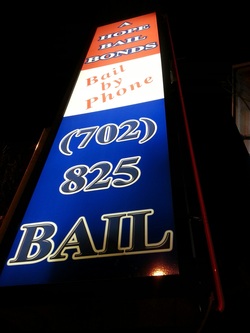 Never done this before.  Walk me through the process.  In a nutshell, bail bonds in Henderson can be summed up in the following ways:  When you get that call, do not panic!  Your first order of business should be to remain calm and reassure the loved one you're going to handle it.  Now do yourself a huge favor (since your doing the person in jail a huge favor), and bail that person out of jail in the easiest way possible.  Call your reputable bondsman now and do the 5 minute phone application.  You'll be asked a quick series of questions about the defendant and yourself.  After that is done, simply charge the 15% premium to a debit or credit card, and we'll get that bail bond posted without you leaving home or work and without additional collateral or junk fees.  We'll also let you know the Henderson jail release protocol and where to go pick up your loved one when he or she is released.

Can you tell me about the procedure to qualify for Henderson bail by phone?  Sure, as long as the person calling has a recurring, steady income and a Visa, Mastercard, or Discover (or debit card with Visa or Mastercard logo of course) to secure the 15% Nevada premium, we can do it....that's the first step.  The second requirement is that the defendant is local and stable in the community.  The 3rd requirement is that after the defendant is released, the caller will be required to email, fax, mail in, or otherwise fill out the required indemnitor paperwork as soon as practical.  The entire bond approval process takes ten minutes, and upon approval, a bondrunner can be dispatched to post bail within 20 minutes (with no added fee) while you rest in the comfort of home!

So if every bail bonds company charges the same, why should we choose A Hope Bail?  We are so glad you asked!  No one in town can do bail bonds like we can!  First of all, our paperwork process is streamlined.  When other bail bonding companies want to have you fill out 20+ pages of paperwork with pay stubs, utility bills, car titles, and credit reports, we spare you that trouble.  It's rare that you'd go through more than 4 pieces of paper at our office and that's including your application!  Then we don't nickel and dime Henderson and Las Vegas customers with outrageous runner fees, doc fees, collateral fees, and credit card surcharges.  PLUS, we will not make you run a bail bond to the jail yourself!  Isn't that why you're hiring us?  All other companies will say "bail by phone" just so you call them.  Then once you're on the hook, they will coax you into the office and make you jump through hoops at all hours.  At A Hope we mean what we say with our exclusive "bail bonds by phone" program.  Then check out our financing program for bail bonds in the next question below.

What if I don't have the full 15% upfront?  That's alright because you're using the right agency!  Our bail bonds agency offers payment plans the majority of the time, so we can work it out with you!  After an acceptable down payment, we'll put you on a flexible payment option (interest free of course) until you reach the required 15% level.

Why can't I pay the bail amount directly to the jail?  Yes if you do have the full bail amount in cash (as opposed to just the 15% you'll need with a bondsman), you'll be able to do that.  Some courts will even accept major credit card for bail.  The courts and tax payers do appreciate a bail bondsman securing a defendant's appearance through a bail bond though.  The courts like the fact that if a defendant misses court, a bail agency will make effort to apprehend the fugitive to put him/her back in custody.  Keep in mind that if the person you bail out messes up on one court date or fails to comply in another way, you're out that entire bail amount with little to no recourse.  You have an added level of protection in that regard when you use a Las Vegas bail bondsman because you don't necessarily or automatically forfeit the full bail amount if the person misses court.  Plus, you can't do bail by phone in Las Vegas or Henderson with the courts or jails!

What if I cosign, pay the 15%, and the defendant misses court?  Relax, you're not necessarily on the hook for the full bail amount yet.  As long as you get the defendant to get back on calendar or turn himself/herself in, your out of pocket expenses will be little to none.

What other fees do you guys charge?  None, that's it!  Other than the $40 fee the court charges to post each bail bond, we only charge the 15% fee.  That's the lowest fee we can charge by Nevada law!
- No runner fees
- No doc prep fees
- No credit card transaction fees
- No interest fees
- NO JUNK FEES period!